When hostilities in the First World War ended with the surrender of the German forces on 11 November 1918, thoughts in Great Britain turned to the creation of suitable memorials to the sacrifice made by those who had lost their lives in the war. The Architect Sir Edwin Lutyens was commissioned to design a memorial in London which could provide a focus for remembrance. His design for The Cenotaph was approved, and a temporary structure was completed in time for the Victory Parade held in London on 19 July 1919, shortly after the signing of the Treaty of Versailles on 28 June 1919. By the time the second anniversary of the peace arrived on 11 November 2020, the final form of The Cenotaph was in place.

That design proved highly influential on other war memorials constructed in towns and cities throughout Britain, but the majority of people in Epworth had a different idea. While there was some support for a Cenotaph type of structure, the views of the returned Soldiers and Sailors who had served during the War was unanimously in favour of the creation as a memorial of a recreation ground which could be used by the population at large. They felt that the memorial should be something which would continue to serve the people of the area. This opinion proved to be decisive. Epworth was the first area in the County to provide a playing field for both adults and children as a war memorial.

The Thurlow Croft was available for sale, and a decision was taken to purchase it for use as a recreation ground. Subscriptions opened to raise the funds for the purchase on 24 December 1919, and by the end of February 1920 sufficient funds were in hand to allow the purchase to be completed. The Thurlow Croft was bought for £500 by twenty Trustees on 8 April 1920 to hold as a public recreation ground “as a perpetual memorial to the men of Epworth who fell in The Great European War (1914 to 1918)”. There were 145 donations by individuals, ranging from £42 to 10 pence. In addition, the ex-Soldiers and Sailors raised £100, the Working Women’s Association contributed £47.11, the Epworth Belgian Fund £24.34, a Garden Fete raised £40, a concert raised £17.50, £8.65 was collected at the Peace Celebrations and £2 at a Welcome Home Tea, and there were donations from the Agricultural Show of £30.12, the Cricket Club of £19 and the Town Lighting Committee of £2.36. Clearly it was a community wide effort. The total raised enabled the Trustees also to acquire in December 1922 part of an adjoining orchard for £90 to add to the land available. 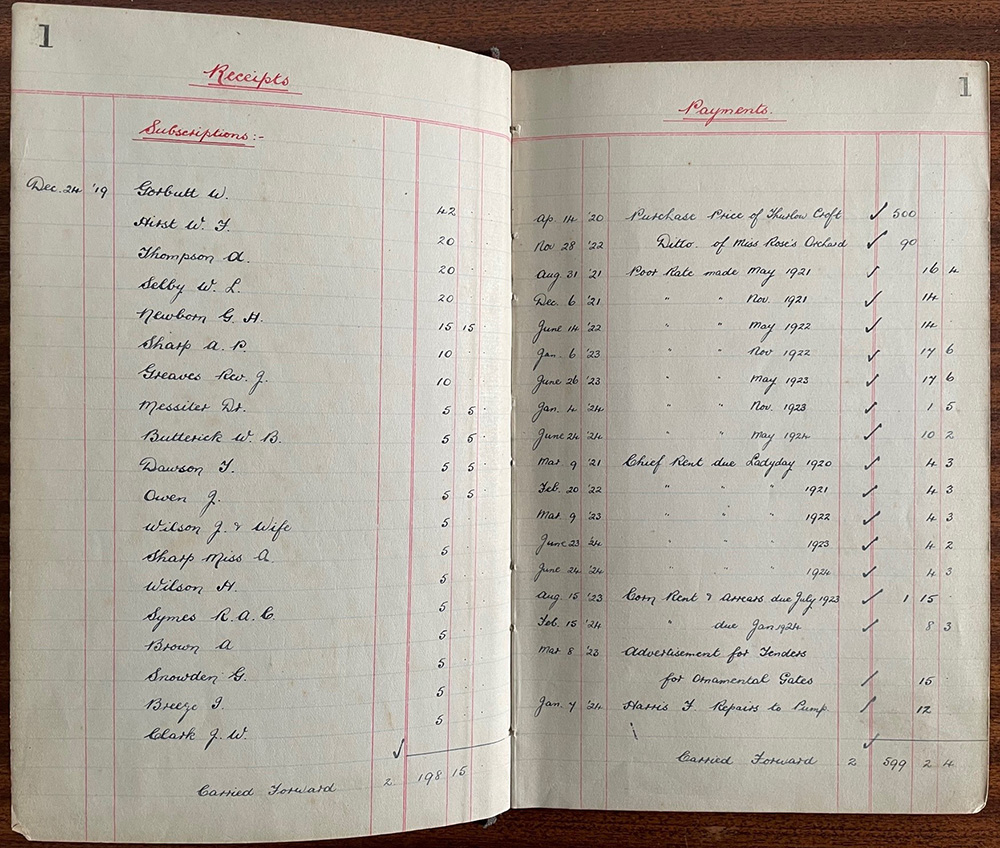 There was still much work to do. The land needed to be fenced and gated. It also needed improved drainage and to be levelled. In the short term it was used for grazing sheep, but quite soon areas of the land could be used for football and cricket. By 1923 a Bank Holiday Sports Day was held which raised £44.30 for the Trust’s funds, and by 1925 an area was being set aside for use for tennis. Garden parties were held and a children’s amusement area was set up. Thurlow House, however, was subject to a tenancy, and it would take until 1936 for the tenancy to be terminated and vacant possession of the property to be obtained. The Trustees wished to erect memorial gates at the main entrance to the recreation field, and this work could not be arranged until Thurlow House had been demolished. This was achieved during 1936, and the memorial gates were designed, purchased and erected during 1937.

It was only then that the Trustees considered that the formal opening of the recreational field could properly take place. 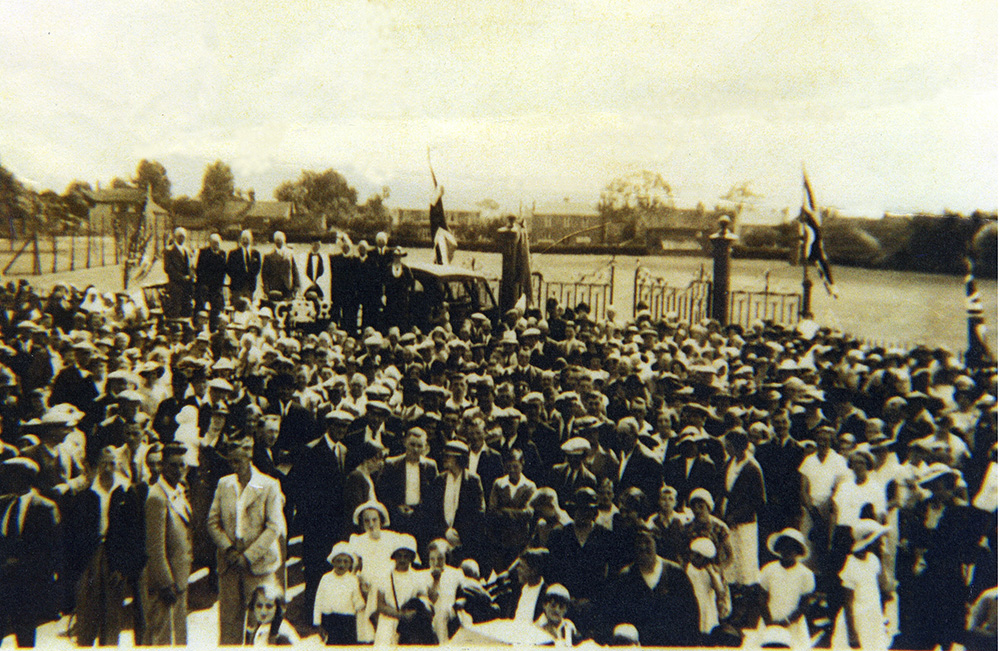 The opening ceremony was in fact held on Bank Holiday Monday, 6 August 1938. A very substantial crowd attended a procession from the Market Place in Epworth to the Field, where the memorial gates were dedicated and the Field was officially opened. There were fancy dress parades, children’s sports, tennis and bowls tournaments and games and side shows.

Ahead of the formal opening of the Field, the sports clubs using the facilities (Bowls, Tennis, Football and Cricket) had agreed to work together to deal with the maintenance of the ground for their various uses. They would also seek to provide a pavilion to use as changing rooms and a shelter for spectators. This arrangement was accepted by the Trustees. Ironically, however, the start of the Second World War so shortly after the opening of the Field interrupted the arrangement. So many people from the town were involved in the armed services and in war work that during the War it was difficult to maintain the property, although it was arranged that military personnel stationed in the area could have the use of the Field, and use by local children continued.

In 1944, the then Epworth Parish Council suggested that they should take over responsibility for the Field and its maintenance, but the Trustees were unwilling to agree to this, suggesting that the question should be revisited after the end of the War.

By the end of 1945, the sports clubs who had previously used the Field were being re-formed, and in March 1946 the Field Maintenance Committee resumed its work. Funds were donated by local organisations and individuals to restore and improve the condition of the Field. In September 1946, the Trustees arranged for the memorial gates to be altered to serve as a memorial also to those from the area who had lost their lives in the Second World War.

In 1948, it was again suggested that the Trustees should consider handing over the Field to the Parish Council for future management and maintenance, but after due consideration the Trustees rejected the idea, emphasising that they wished to continue discharging the functions given to them by the Trust contained in the conveyance of the land to them in 1920.

In 1971, the Field Maintenance Committee suggested that the Trustees should consider selling the land at the Thurlow and using the proceeds of sale to create a replacement on a larger site. Some Trustees were sympathetic to this idea, but other felt strongly that the Field was Epworth’s war memorial and should not be moved. As the Memorial Field was registered as a charity, the Trustees were advised that any sale of the land must be at the best price possibly obtainable to ensure that the maximum funds were obtained to be used to secure an adequate replacement. The Trustees therefore applied for permission for residential development of the Field in order to establish a valuation which would permit the idea of sale to be further considered. This application met with widespread opposition from local residents, who saw it as a betrayal of the intentions behind the provision of funds for the memorial. In the event, planning permission was refused, and the idea of selling was dropped.

Addition at Carr Side

Throughout the years the field had become home to many Epworth sports clubs including cricket and football teams. 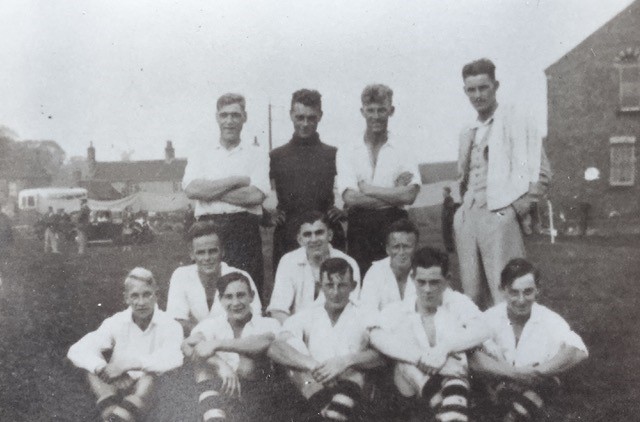 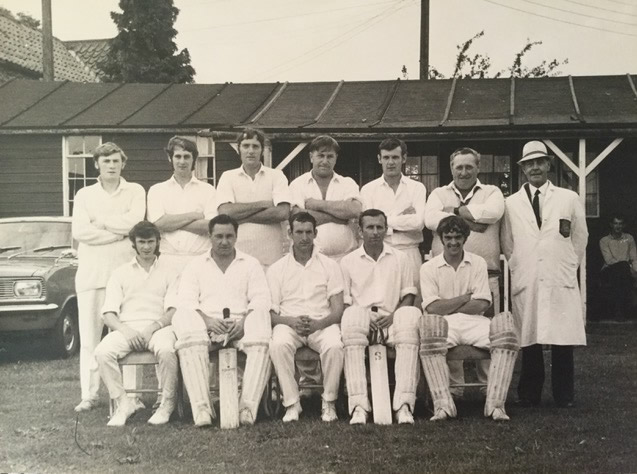 With this use, the concern to increase the area of land available for recreation resurfaced. The Memorial Field extends only to 2.35 hectares. There was concern about the use of the Field for both football and cricket in springtime, when both clubs made claims to use the field at the same time. Members of the Field Maintenance Committee reported in 1978 that a piece of land was for sale at Carr Side which could satisfy the needs of both clubs. Grants would be available to cover much of the cost of acquiring the land and making it ready for sports use, and the balance could be obtained by fund raising and short term loans. The Trustees were not able to agree to purchasing the land on that basis, but the Field Maintenance Committee decided to proceed on their own account and they completed the purchase of the 3.45 hectares Carr Side land in 1979. By 1980, the Carr Side land was in use by the football and cricket clubs, and the debts taken on in acquiring the land had been repaid. The Trustees therefore agreed to take on the additional area and to hold it on the same trusts as applied to the Memorial Field. The Carr Side land was formally conveyed to the Trustees on 23 February 1983 at no cost to the Memorial Field Trust.

During this period also a good deal of building took place to improve the facilities of the recreation fields. In 1975 it was agreed that a separate building would be erected adjacent to the pavilion to provide changing rooms, showers and toilets. In 1987 the new Thurlow pavilion was built along with the Bowls Club pavilion. In 1993 it was agreed that the Billiards Club could construct a building at their expense on an agreed site, and in 1994 an additional area was approved for an extension to this building. Significant car park extension was required in 1995/96 as the site became more heavily utilized. An area was also agreed for the Playschool to erect a building at their expense, and this was completed by 1999. In 2001 and 2002, areas of land were approved for the provision of an area for basketball which completed in 2003 to be followed in 2004 by new Play equipment on the Battle Green entrance. With help from Lottery funding, the Pavilion had a refurbishment in 2012.

Not all work was at the main field, Carr Side too has had significant improvement and addition over the years. Changing rooms and toilets were built in 1983 and extended with showers and additional changing in 1998. Since signing of the lease with The Epworth Colts there have been further improvements and extension to the car park, significant investment in the pitch and fencing and ambitious plans for continued development and use in future years.

For more than a hundred years now the Epworth War Memorial Field has been held as a memorial to those Epworth people who lost their lives in the First World War. It is now dedicated equally to those who fell in the Second World War. The names of those remembered are set out in a plaque on the wall of the pavilion which was unveiled on 2 August 2014, the centenary of the outbreak of the First World War. The Field has been maintained by people from the local community who have acted without payment, and have employed local people and companies wherever possible to carry out necessary work at the Field. 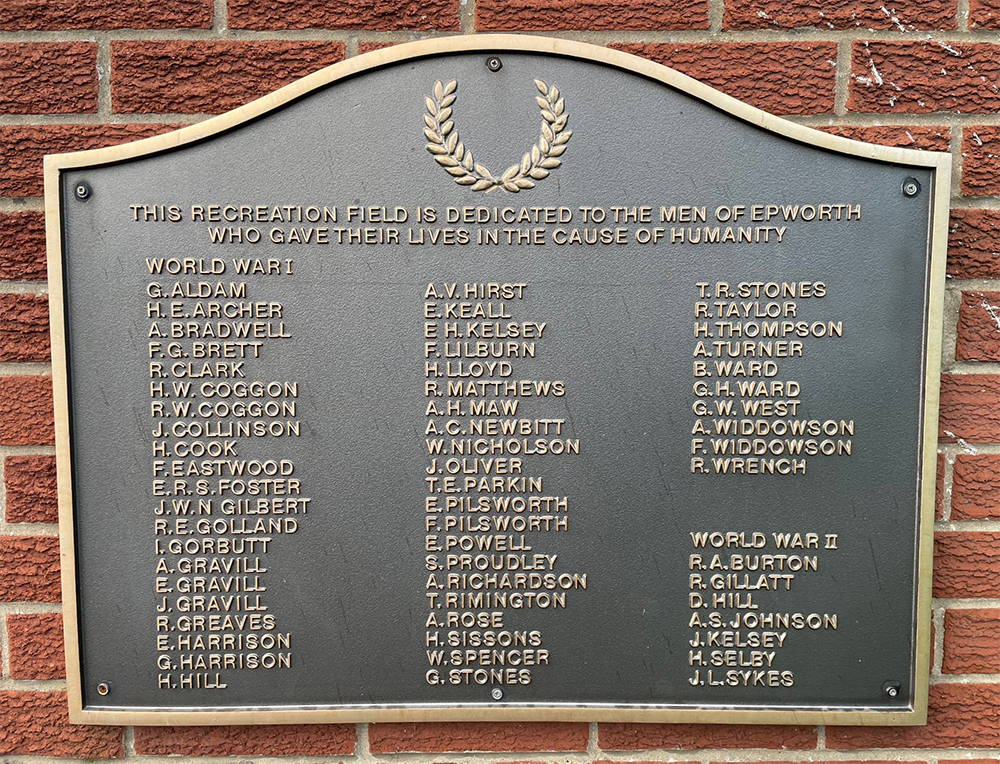 In addition to maintaining the land of the Trust for sport and recreational use, facilities have been provided for a tennis club, a bowls club, a billiards and snooker club, a children’s playgroup and a children’s play area with a safety surface and modern play equipment. There is also a pavilion which is used for musical events, a dance club, art classes, yoga, bridge, weight watchers, community events and charity fund raising events for various local charities.